"The Woman and the Dragon" from Revelation 12: the Red Dragon

The Red Dragon was my starting point for this project. As I contemplated the narrative of the Woman Clothed in the Sun, I have to admit that I was so intrigued at the challenge of how to create the Dragon in stitch that I could not pass up this opportunity to give it a go. He appears in two sections of Revelation 12. He is presented in verses 3 and 4. Verses 5 and 6 describe the Woman giving birth to the Child, offering the Child to Heaven, and then fleeing for the Wilderness. Then the Dragon returns to siege war in Heaven and subsequently faces expulsion from Heaven after his defeat.

3 Then another sign appeared in heaven: an enormous red dragon with seven heads and ten horns and seven crowns on its heads. 4 Its tail swept a third of the stars out of the sky and flung them to the earth. The dragon stood in front of the woman who was about to give birth, so that it might devour her child the moment he was born. .....

So who was the Red Dragon?

The Red Dragon is a personification of Satan or the Devil. Its seven heads wear seven crowns and have ten horns. The narrative does not specify how the ten horns are divided between the seven heads. The number seven is crucial as it usually is connected with the idea of completion in the Bible. In this context, the seven crowned heads refer to the seven deadly sins or the complete embodiment of evil.

As we looked at the various depictions of the Red Dragon in Medieval Apocalypse manuscripts in class, I could not help but imagine how I could stitch each one. My favorite depiction was from the Silos Apocalypse housed at the British Library (image below). Honestly, would this not be so much fun to stitch! I love all the patterns and bold colors, the dots speckling the Dragon, who seems much more serpent-like here than most other depictions. The stars appear like tiny daisies, and the depictions of the Woman are also interesting. My fingers were twitching as color numbers and goldwork techniques filled my imagination. 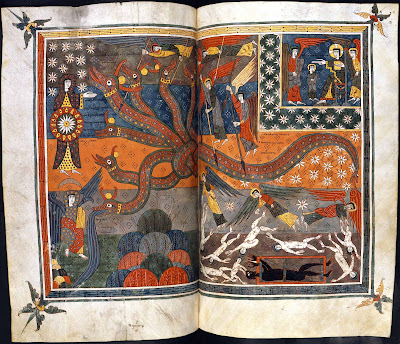 My Red Dragon is inspired by Komodo dragons. I wanted to base it on an animal that was not extinct, that still lurks around the globe. I looked at various ones from different zoos and National Geographic photography and YouTube. Their movement is slow, methodical, and creepy.

Once I had the base body, I played around with adding six more heads. A question that became very important was, "Should the heads be of equal size?". In theory, the answer to that question is probably yes, as the sins are seen as equally bad. However, I felt that it was essential for there to be a larger head, partly as visually it seemed creepier, and partly because in the Christian churches I grew up in, there was common debate about which sin was the "unforgivable sin" as mentioned in the New Testament.
So how was the Dragon depicted in Apocalypse manuscripts?
In most of the manuscripts I have explored, all seven of the heads are of equal size to each other. In both the Douce Apocalypse and the Trinity Apocalypse, this is the case. However, the necks intertwining in the Dragon of the Trinity Apocalypse have a different feel than the more equally long necks of the Douce Apocalypse's Dragon heads.
There are a couple of exceptions that made me feel like it was ok to deviate from the majority for my visual interpretation. The Bamberg Apocalypse is one of those examples and happens to be an Apocalypse manuscript that I find stunning stylistically. As depicted below in folio 29v, the Red Dragon in the Bamberg Apocalypse has one main head with six smaller heads stemming from the primary neck.  Also of note is the beautifully vivid colors used to render this beast.
It was also interesting to consider the division of the horns to the heads as ten does not split evenly between seven heads, and, as you can imagine, there were many different ways that we see the manuscript artists dividing the horns to the heads. I decided that the smaller heads would have a single horn, and the remaining four horns would adorn the most prominent head. This acknowledges the possibility of an unforgivable sin, which may be outside or inclusive of the delineations of the seven deadly sins.  It also is a way to recognize that each person may not struggle with different sins equally.

Now that I had the basic outline of my Red Dragon, we have reached the "fun" part-- how to make it come to life in stitch! I knew I wanted it coming off the ground fabric. This Dragon was not going to be a shrinking, wallflower of a dragon. I began by padding him up with layers of felt on the body and soft string under felt for the tail. Watching the movements and joints of the Komodo Dragons helped me figure out how I wanted to pad the body. I, unfortunately, did not take photos between each layer, but the thickest area of felt was about 5 or 6 layers deep. 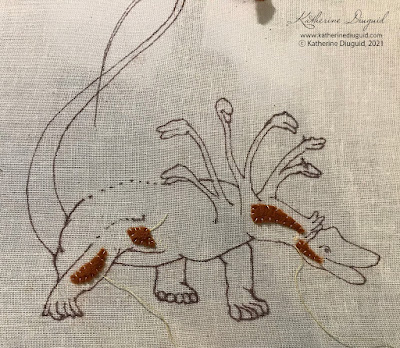 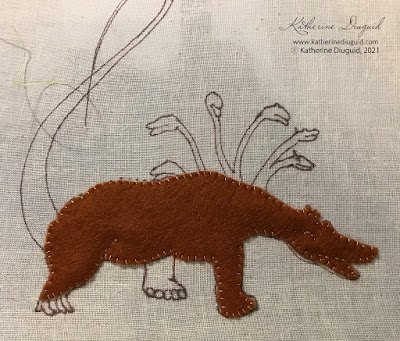 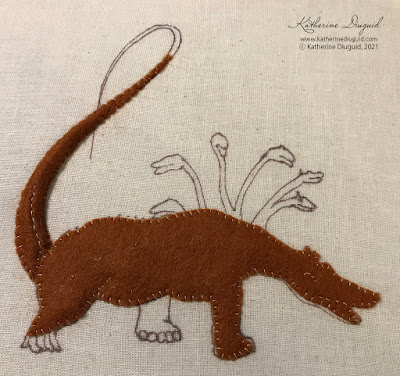 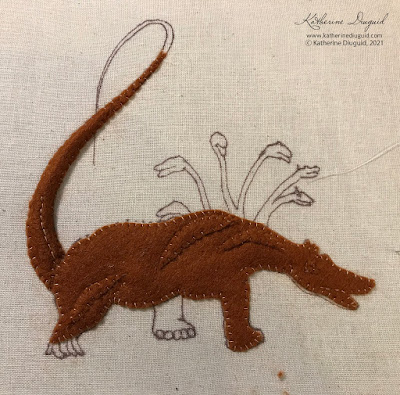 Once the padding was complete, it was time to add the first layer of stitching. I rendered it using split stitch (a nod to Opus Anglicanum) but using multiple strands in my needle to allow for some fun color mixing. The numerous strands also created a great texture that felt reptilian.
Also, a note: I know he has three legs. I had planned for the back leg to be covered in foliage, so I haven't forgotten about it. It's just going to be covered. 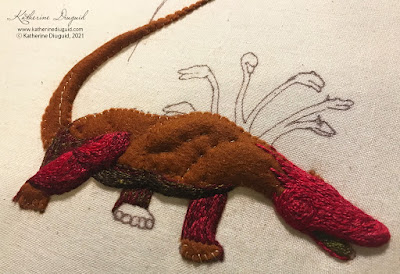 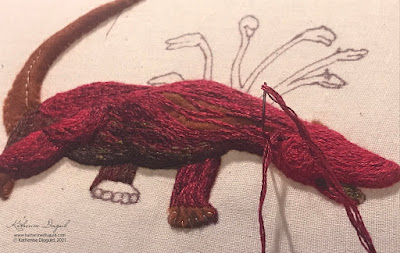 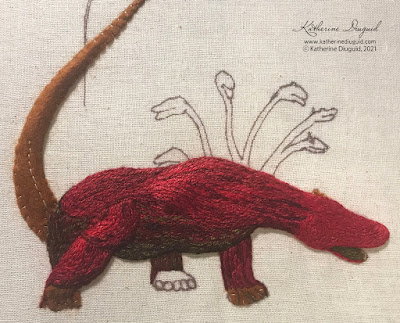 Then, I played around with different ways of making it more scaley using various needlelace and goldwork techniques. I hated all of them once they were on the Dragon, so each and every attempt was patiently taken out. Sometimes that is the only thing to do. Below is one of the failed attempts. This iteration was the one I thought was the least offensive as you could sculpt the needlelace to stand off the body. However, I was not fond enough of it to keep it, so it went too. 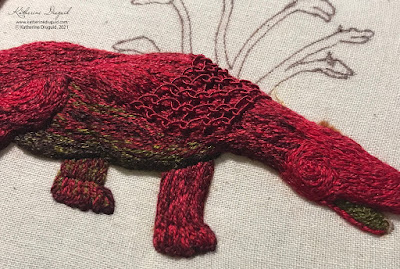 Now, here is the part of the making story that I love. I was so excited about the Dragon and stitching it that I kept telling my husband different ways I was thinking of stitching it. As he went to bed, he said to me, "Just don't make it too complicated." In fairness to him, I was originally trying to finish this by the time the class finished too, but all I could think was-- challenge accepted! I wanted to make the heads 3-dimensional. I wanted them coming at you! Flat heads would not do for this demonic creature lurking in my composition. I also had this idea of sculpting tubular Ceylon stitch to create these auxiliary heads that I could not wait to try.
Tubular Ceylon stitch is used in 17th Century raised-work to create little Ceylon stitch caterpillars to add to the flora and fauna that dapples the compositions. Why could I not make dragon heads like I would make the caterpillars and make them stand up and join it with a needlelace head? So, I tried it. The first result was ok, but I think I tried to accomplish too much by joining the heads into a snake hood-type structure. Below is an example of a pair combined. 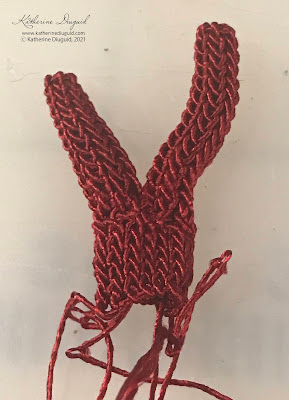 After testing out joining the necks, I decided that individual neck/heads joined directly to the body was the best way to go forward. It allowed me to blend it into the body better and provided a smooth surface if I wanted to add anything after the joining. 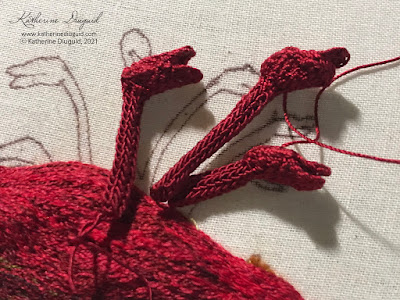 I plunged the ends down to help secure the heads. The long silk pins enabled me to adjust the heads' directions and sequence as each neck is a different length to allow for perspective in the composition. Once I pinned them to my liking, I secured them to the body blending the joining stitches into the body stitches. 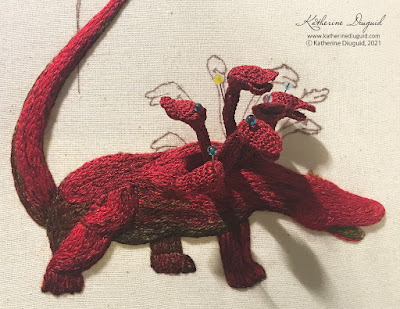 Now, the Dragon needed a wing. I made it with a mix of Gilt Sylke Twist, silk gimp, and silk floss using Brussels and corded Brussels stitch.  Once completed, it was released from the template fabric and secured into place on the Dragon's body. 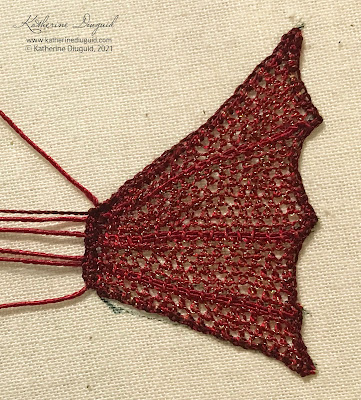 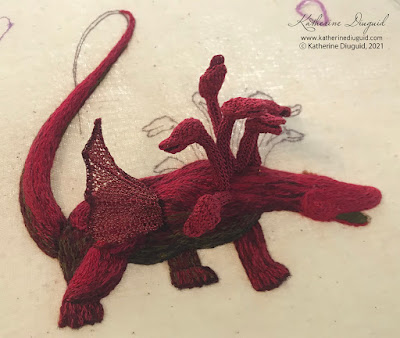 Next came drizzle stitch horns and french knot eyes before adding the final details of gilt crowns, tongues, and claws.  Then my Red Dragon was ready to be appliquéd into place, so my attention turned to the ground fabrics. 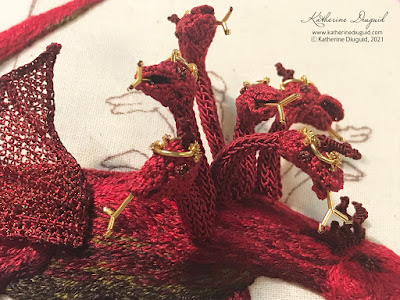 Next time-- the background....

A Note About This Project: This is not a project foretelling the end of the world. I am also not trying to start any theological debates. I created this embroidered panel inspired by a continuing education class I took this spring, "Animals and Monsters at the End of the World in Medieval Art," with Dr. Monica Walker. In this course, we compared depictions of animals and "monsters" in a selection of Medieval Apocalypse Manuscripts and Art. It was fascinating to approach the subject of the Book of Revelation from an art history perspective and compare how the various characters and narratives were depicted.  This is my personal interpretation of the story inspired by a couple of the manuscripts studied.

Referenced Sources: (this is only a selection from my full bibliography)

A. G. Hassall and W. O. Hassall, The Douce Apocalypse: with an introduction and notes (Faber, 1961).

Nigel J. Morgan, The Douce Apocalypse: picturing the end of the world in the Middle Ages (Bodleian Library, 2007).

Link to my Masters blog:
www.katdiuguid.blogspot.com

All photos and sketches are ⓒ 2011-2021 Katherine Diuguid unless otherwise noted. They are not to be reproduced or used without my personal consent. Please be sure to credit my work appropriately using my name and site.